Unpacking our Library consists of a series of hybrid collective reading practices both digital and physical inhabiting the Archive Inventory library, in collaboration with accomplice libraries in Berlin. How do we inhabit a library collectively? How does a library become a medium for connecting readers’ trajectories, struggles and potential alliances? What are the strategies that collective readings set-up to create moments of exchange, solidarity and citizenship? The program engages with communal formats of readership – from workshops, reading groups, community libraries to reading clubs –, as well as with cultural practitioners, librarians, activists and artists. Each session put into play shared structures of archiving and reading, from digital collections, re-publications to translations and on-going investigations. By socializing collective models of library activations, the program collectively unpacks Archive’s library at its new home in Berlin. Each encounter fosters and nurtures a net of accomplices with whom to engage with in the long-term, weaving a format in which collaborations beyond the scope of this project are welcomed. The very word ‘accomplice’ stems from the Latin complicare which means to “fold, weave together” and bears the meaning of complexifying. By folding a network of accomplices, the program aims to create a kind of virtual publishing space, bringing together complex and multiple perspectives, a platform for research and a convivial web to collectively activate proposals of readership and archiving.

Unpacking our Library is a strain of Publishing Practices, core formation of Archive’s program, committed to an expanded idea of publishing, that triggers and holds a space for study, action and multisensorial gatherings. Publishing Practices is curated by Chiara Figone, Paz Guevara and Beya Othmani. 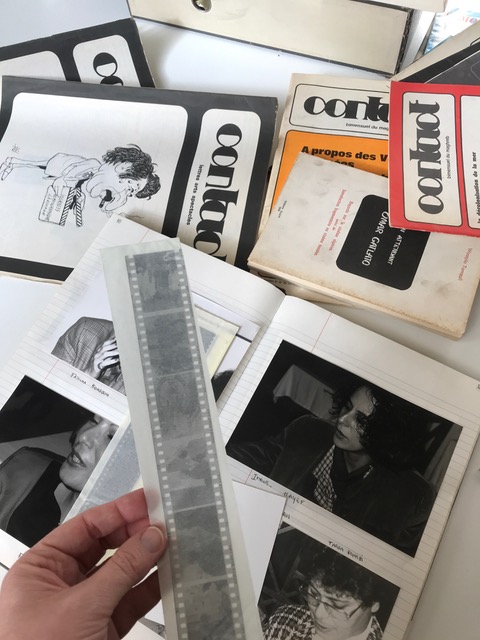 Memory and remembrance have been at the center of Touda Bouanani’s work and research from the start. Orality, literature, writing in video-poems. The disappearance of her parents, and particularly that of her father, a filmmaker and writer, turned her life upside down, transformed her priorities and accentuated her work on memory and the duty to preserve and transmit this work. She directed the issue of Nejma, No. 9 (Les Colonnes editions, Tangier) on Ahmed Bouanani, worked with Ali Essafi in the realization of Crossing the Seventh Gate, 2017, on and with Ahmed Bouanani, directed with Omar Berrada the edition of The Seventh Gate, a history of cinema in Morocco from 1907 to 1986, (Kulte editions), a book written by her father.

Lea Morin is an independent curator and researcher. She is engaged in projects of editing, exhibition and film restoration that bring together researchers, artists and practitioners. Her research attempts to contribute to a better knowledge of artistic and especially cinematic modernities that have been rendered invisible by dominant narratives. She is especially interested in the circulation of ideas, forms, aesthetics, and political and artistic struggles in the period of independence movements (1960s and 1970s) and in the stakes of cultural decolonization. She is also part of the team “Archive Bouanani, a history of cinema in Morocco” in Rabat, and “Talitha” devoted to alternative and experimental cinematic and sound archives, preservation, and redistribution in Rennes. / www.talitha3.com /

Maya Ouabadi was born in 1988 in Algiers where she lives and works. After studying French literature, she worked for six years in the publishing house Barzakh, then as an independent editor. In parallel to her activities in publishing, she is part of the cultural association Chrysalide and on the organizing committee of the literary season of Mali. In 2018 she founded Motifs Editions, which publishes, among other things, the bilingual (French-Arabic) literary criticism magazine “Fassl”, which offers in-depth reviews, interviews and portraits of Algerian and foreign authors, as well as unpublished texts.

Intilak is an initative of Léa Morin, Touda Bouanani, Maya Oubadi in collaboration with Éditions Motifs, Archive Books and Talitha. Intilak(Women, arab … and Filmaker) is supported by “The Research on the Arts Program (RAP)”, a joint program between the Arab Fund for Arts and Culture (AFAC) and the Arab Council for the Social Sciences (ACSS).

𝘐𝘯𝘵𝘪𝘭𝘢𝘬 is an on-going research committed to a feminist and decolonial rewriting of the History of Cinema. The research focuses on a series of minored texts, manifestos, essays, interviews and books produced by women filmmakers, theorists and critics of the cinematic avant-gardes of the 1960s and 1970s in North Africa, such as Mouny Berrah, Wassyla Tamzali, Farida Benlyazid, Assia Djebar, Monique Martineau Hennebelle, among others. 𝘐𝘯𝘵𝘪𝘭𝘢𝘬 seeks to unearth, collect, study and bring those essential texts on cinema out of the margins, to put them back in the centre and facilitate their circulation.

As part of the upcoming exhibition This Bridge Can Ge Us (opening on December 4), the writings Wassyla Tamzali will resurface and be circulated during the period of the exhibition along with a selection of archives from the Intilak research project.

Tamzali will loan and allow access in Berlin to her private archive of the pan-Maghrebi magazine Contact (1972 – 1974), that documented cultural life in Morocco, Tunisia and Algeria in the early 70’s and in which Tamzali regularly contributed as a cultural reporter and cinema critic.

A selection of other publications will also be made available for consultation, including issues of Les Deus ‘Ecrans (1978 – 1983), a journal co-directed by Mouny Berrah (1949-2000), one of the most prolific Algerian woman film journalist and script writer, CinémAction (1978-2019) and issues of Moroccan cultural journal Lamalif (1966-1988).

The fourth Unpacking our Library activation will therefore delve into the 𝘐𝘯𝘵𝘪𝘭𝘢𝘬 archive and discuss the regimes of circulation and visibility of those writings. The conversation will also touch upon the upcoming editorial project of the group, a re-edition and translation of Wassyla Tamzali’s Waiting for Omar Gatlato, a source book on Algerian and Tunisian cinema published in 1979.

The exchange will be followed by a screening of the movie Omar Gatlato by Merzak Allouache (1976).

Feminist Politika/ Feminist Politics (2009-2015) was a regular feminist journal published by the Socialist Feminist Collective in Turkey. A women-only group, the collective targeted contemporary forms of patriarchy under its mutual interaction with capitalism by situating the category of women’s labour at the core of its analysis.

Feminist Politika/ Feminist Politics (2009-2015) was a regular feminist journal published by the Socialist Feminist Collective in Turkey. A women-only group, the collective targeted contemporary forms of patriarchy under its mutual interaction with capitalism by situating the category of women’s labour at the core of its analysis.