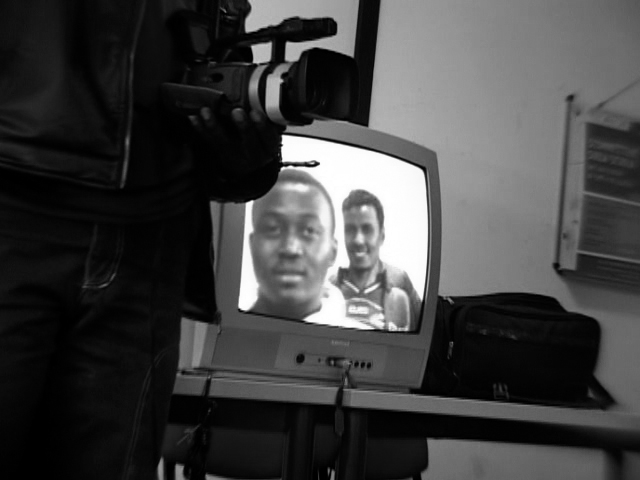 Presentation and screening at 7 pm

After the screening Dinner at Archive kitchen

That relation between us,
or among us
Screening programme
initiated by Maria Iorio and
Raphaël Cuomo

That relation between us, or among us follows bodies on the move, their action, retracing displacements and transitions, but also those passages from one place to another constituted by acts of translation. The programme recovers some of those moments recorded by the camera: it examines the process of an “experimental archaeology of the present”; it exposes diachronies, the shifts between different border regimes, the continuities of power and the subjectivities that resist it. The programme reconstructs transnational counter-histories as they emerge from the productions and practices of “minor”, decolonial, accented cinemas: they oppose the fiction of an ever-present migration emergency – an “emergency” produced and perpetuated by European policies that make people illegal, by borderisation and spectacularisation mechanisms, and which goes from one “crisis” to the next. What comes to light in the films of this programme, and what is also at stake for the praxis they invented, is a relation. This arises from the action of bodies that appear, speak out, take up the camera, became visible or imperceptible, when they act in concert and invent new forms of alliance, solidarity and commonality. Beyond the chronicles of this action that articulates a principle of equality, what is therefore at stake here is nothing less than freedom – that “relation that can and does happen between us, or indeed among us” – and, ultimately the politics of the possible.

Taking the form of an occasional film society, the screening programme that relation between us, or among us is a section of a multipart project by Maria Iorio / Raphaël Cuomo. It will accompany their upcoming exhibition at Archive Kabinett (September 2019) and develop autonomously thereafter.

That relation between us, or among us unfolds in the itinerant series a cinema situation, a long-term project initiated by Maria Iorio / Raphaël Cuomo, which involves research, workshops, lectures, screenings and performances.

Il deserto e il mare is a collective video that introduces the life “after the desert and after the sea” of a group of people who fled from Eritrea, Ethiopia and Sudan, and who subsequently became the protagonists and authors of the film. Their present, in 2007, becomes visible in several distinct episodes that detail the difficulties of their daily life in Italy as refugees, social and spatial marginalisation in the metropolis, the administrative procedures of a dysfunctional bureaucracy and the precarious nature of migrant labour. These video “notes” also chronicle moments of exchange and solidarity, the assembly of the dispersed community able finally to reunite to celebrate together. These shared moments enable the protagonists to collectively remember the past, their trajectory and passage to Europe, the perils of the journey through the desert and across the Mediterranean Sea. With their accounts, women and men bear witness to friends who passed away, but also to those who are still on the way and whose lives remain at risk in Libya. Through multiple narrations, the camera in the role of the accomplice, and its singularly heterogeneous form, Il deserto e il mare retains some of the complexities of the contemporary migratory experience dictated by the current border regime, emphasising the point of view of those who are actually living it. To film becomes here an act of self-representation and self-portrayal, an affirmation by migrants of their capacity for action, of their agency.

Il deserto e il mare resulted from a video workshop initiated at the Asinitas language school in Rome in 2007. Further initiatives promoting self-narration practices among migrants developed and resulted in the creation of the Archivio delle Memorie Migranti (Archive of Migrant Memories, AMM). In recent years, the AMM has been working on preserving voices, stories and images, “traces” of the complex and multifaceted process of transnational mobility. These records, significantly, shed new light on the impact of this transformative process on contemporary Italy, as well as revealing how the country’s colonial past, and the ambiguous displacements of the memory of this episode, continue to shape the present.

Dagmawi Yimer was born in Addis Ababa in 1977 and was a second-year law student when he left his country, after the 2005 postelection unrest in which hundreds of young people were killed and put in jail. After a long journey across the Libyan desert and the Mediterranean sea, he came ashore on the island of Lampedusa on July 30th 2006. In Rome, after having participated in a video-making workshop in 2007, he co-authored the film Il deserto e il mare (The desert and the sea). Subsequently, he was co-director of the documentary films Come un uomo sulla terra (Like a man on earth) in 2008, C.A.R.A. ITALIA (Dear Italy) in 2009, and Soltanto il mare(Nothing but the sea) in 2011. The same year, he coordinated the collective film project Benvenuti in Italia(Welcome to Italy), and directed one of the five episodes. He filmed Va’ pensiero – Storie ambulanti (Walking stories) in 2013 and Asmat (Names) in 2015. He is the co-founder and vice president of the association Archives of Migrant Memories (AMM) in Rome.

* Displaced outside of the cinema, the films invite us to form a new assembly. The series a cinema situation concentrates not only on the films but also on the potentiality of this assembly and, more widely, on the social practices that have contributed to the creation of new film cultures – film societies, cineclubs, film-makers clubs within decolonial movements, video salons, film workshops, etc. – by establishing other modes of production and distribution, by setting up spaces of freedom, sites for emergent subjectivities. The series would have us question our relation to the films, to their images, complicating it by a “situation”, a cinema situation, that opens up new aesthetic and political issues and encourages us to imagine new practices and futures for film.