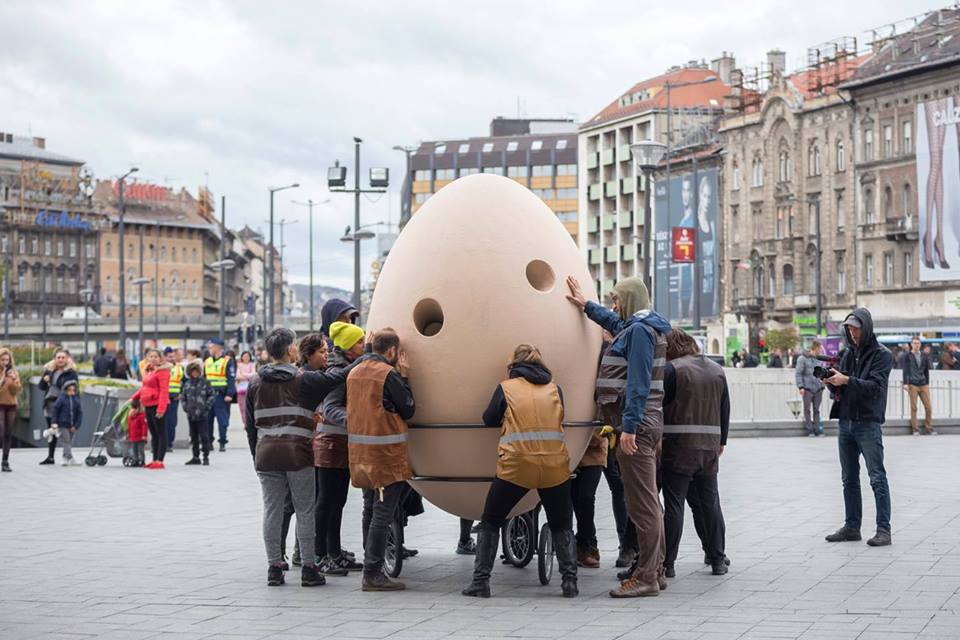 On the occasion of the exhibition opening
The Curfew, a project by Katarina Sevic and Gergely Laszlo

+++Public talk: “Don’t save your skin, get it off your back!”
Potentials of artistic intervention in the public space+++

Realized in Budapest, Hungary in the framework of the OFF-Biennale in autumn of 2017, street play The Curfew is an alternative form of public demonstration.

A troupe roves the streets of Budapest. They push in front of them a three-meter high egg-shaped, multiplayer megaphone. They stop at busy public squares to perform their play as a speaking choir about the transfiguration of a group of security guards. They are helped by the magical “talking egg” in which the voices reborn and amplify.

By using tools related to the various traditions and forms of street-theater, such as grotesque and humor, the performance aimed to celebrate freedom of expression and fearlessness, acting against a general mood of political and civic frustration and passivity. ‘The Curfew’ was produced by OFF-Biennale Budapest 2017.

Archive Journal Issue No. 3 will be launched, focusing on The Curfew with texts by Zsófia Bán, Kata Krasznahorkai, Andrej Mirčev, Hajnalka Somogyi

The public talk is initiated and co-organized by Critique & Culture e.V. in the framework of the program series GREY ROOM.

The public talk in the framework of GREY ROOM has been realized with the kind support of the LOTTO-Stiftung Berlin.

Katarina Šević and Gergely László (member of the collective Tehnica Schweiz) have worked together on several occasions. They realize their projects through groups of objects, accompanied by performative situations and events, combined usually with text and narration. They are propelled by the surrounding social dichotomies of today, and their artistic methodologies are based on complex working processes with the occasional use of archived documents.