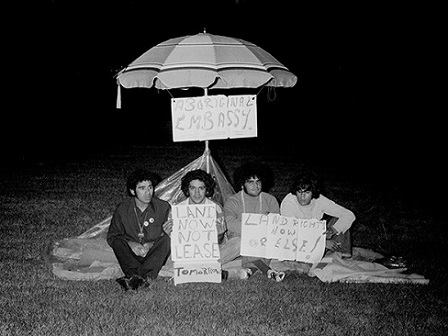 For the 41st session of the film series, Rachel O’Reilly introduced aboriginal community activist and Gumbaynggirr man Roxley Foley, part of the current generation of grassroots activism in Australia to present films and a discussion. The films selected are rare and vital documents of history, struggle and periodic return, key for comprehending histories and futures of indigenous Australian intersections of art, resistance and diplomacy. Screened in the wake of a next wave of resource development, paternalistic management reforms and rollbacks of already weak native title rights, their performative agency were put in dialogue by Roxley with a present tense of activism, creativity, and strategic internationalism.

Roxley Foley is a leading Australian aboriginal community activist, and recent Sacred Firekeeper and Custodian of Canberra’s Aboriginal Tent Embassy, which represents the political rights of Aboriginal Australians. The son of renowned Gumbainggir activist and historian Gary Foley and grandson of prominent anti-nuclear advocate Dr. Dennis Matthews, Roxley has been involved in indigenous and environmental activism from a young age. He has co-organized countless actions both in Australia and abroad, including the Summit for Freedom, which took place in Alice Springs in November 2014, and recently secured the return of remains of fifty Aboriginal Australians and the entire remains collection of Maori, Pacific Islander, and Hawaiians held by the Staaatliche Kunstsammlungen Dresden. He is particularly interested in the potential that grassroots activism and small motivated groups have to affect wide-reaching change.

On January 25 1972 the Australian Prime Minister William McMahon stated that his Government would never grant land rights to Aboriginal people in Australia. The next day, four men pitched a beach umbrella with a sign saying Aboriginal Embassy on the lawns opposite Parliament House, Canberra. So began the most significant act of dissent in Australian history. Filmed within events unfolding, this key historical documentary incorporates interviews with black activists, the work of the National Black Theatre, Aboriginal Legal Service and Aboriginal Medical Service, plus footage of the demonstrations and arrests. Courtesy: Smart Street Films.

In the late 1960s and early 1970s, with the revoking of the reserve system in New South Wales, the Sydney suburb of Redfern became home to over 20,000 Aboriginal people seeking friends, family and work. Its slums were the most affordable place for the displaced while overcrowding and overt racism created conflict with police. In 1967 the overwhelming “yes” vote in the Referendum gave Aboriginal people political hope; pioneers like Faith Bandler and Kath Walker (Oodgeroo Noonucle) pushed at necessary reforms, but little changed. From 1971-77 talented untrained activists formed The National Black Theatre, which became a focal point for activism, theatre, dance and song as powerful political tools. Renowned filmmaker Darlene Johnson was a child during the events in which her mother participated. The film is her tribute to the times. Courtesy: Darlene Johnson.

Rachel O’Reilly is a writer/artist, researcher and curator, leading the seminar ‘At the Limits of the Writerly’ at the Dutch Art Institute. She worked as a curator at the Gallery of Modern Art | Australian Cinematheque, Brisbane, including the Fifth Asia Pacific Triennial from 2004-08. At the Jan van Eyck she developed The Gas Imaginary exploring the install of unconventional extraction investments in settler colonial space (with PALACE architects, presented internationally by Frontier Imaginaries). She recently curated ‘Planetary Records; Exploring Justice between Art and Law’ the public program of the Contour Biennale with Natasha Ginwala, co-wrote On Neutrality with Jelena Vesic and Vlidi Jeric, and writes with Danny Butt on infrastructures of aesthetic autonomy (joaap.org/issue10/oriellybutt.htm). She is a member of Extracted Bodies_Corporeal Grounds (xtractivism.tumblr.com) and working on a book of her drawings with Archive Books.

< how does the world breathe now? > is a 52 week film series at SAVVY Contemporary inviting artists, thinkers, activists, poets, scientists, curators and other practitioners to select movies of our nows* | MORE INFO : http://savvy-contemporary.com/index.php/projects/film-series