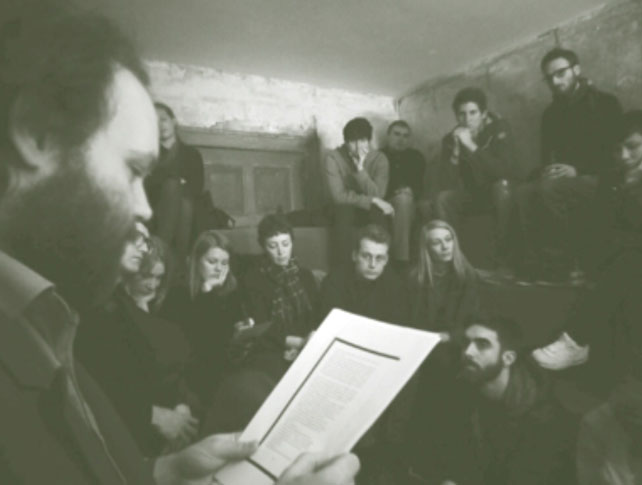 An evening to celebrate two recent publications by the artists Mahony. On March 11 there was  a talk by curator and writer Post Brothers who contributed to Mahony’s Seeing Sight (Verlag für moderne Kunst, 2013) and novelist and editor John Holten who contributed to how a mosquito operates (Broken Dimanche Press, 2014). There were two short screenings of some of Mahony’s work related to these books.

Most recently Mahony had a Soloshow in Galerie Emanuel Layr (2014), a Solo exhibition in Künstlerhaus Bethanien (2013) as end of their one year residency and one in La Criée, Rennes (2013)

Post Brothers is a critical enterprise that includes Matthew Post—an independent curator and writer often working from elevators in Oakland, Antwerp, and Berlin. Post Brothers received an MA in Curatorial Practice from the California College of the Arts, SanFrancisco (2009); and a BFA from Emily Carr Institute, Vancouver (2006). He has curated exhibitions and presented lectures and projects in Poland, Mexico, Canada, the United States, Germany, Austria, Belgium, and China, where he contributed a video and an unrealized screenplay in the 9th Shanghai Biennale (2012). He recently curated “The Excluded Third, Included” at Galerie Emanuel Layr in Vienna (2014) and “Clinamen” at Xawery Dunikowski Museum of Sculpture (Krolikarnia), Department of the National Museum, Warsaw (2013). He has an ongoing library/publication project, “Memoirs Found in a Bathtub”, at Objectif Exhibitions in Antwerp. His essays and articles have been published in Annual Magazine, the Baltic Notebooks of Anthony Blunt, Cura, Fillip, Kaleidoscope, Mousse, Nero, Pazmaker, Punkt, and Spike Art Quarterly, as well as in numerous artist publications and exhibition catalogues.

The Irish writer, artist and publisher, John Holten (b.1984) studied at University College Dublin and the Sorbonne-Paris IV before obtaining an MPhil from Trinity College Dublin. His novel The Readymades was published in 2011, and most recently he has written fictional or immersive texts for the artists Mahony, Natalie Czech, Darri Lorenzen, Jani Ruscica, Lorenzo Sandoval and The LGB Group. His work has been included at Center, Berlin, Malmö Konsthall, The White Building London, David Zwirner Gallery New York (with Aengus Woods) and NGBK Berlin, amongst other places. In 2011 he received a Literature Bursary from the Irish Arts Council. His video commercials for his next novel Oslo, Norway have been exhibited in Plan B Gallery and Team Titanic, Berlin and an extract appeared in the first issue of the journal Gorse in spring 2014. www.johnholten.com