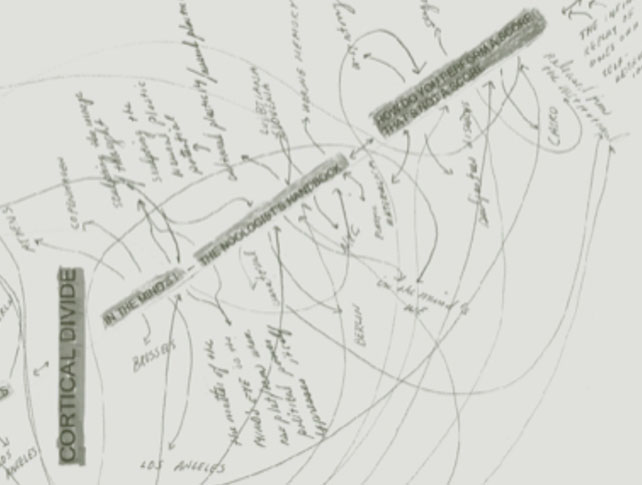 Berlin Works: The Noologist’s Handbook and Other Art Experiments focuses on a series of recent projects of the Berlin-based American artist Warren Neidich, whose central preoccupation is, in fact, art research. More importantly, in focusing upon art practices that revolve around profound investigations of the complex reciprocal relation between contemporary theories of cognition, neuroplasticity, and art, on the one hand, and the emergence of new reciprocal relations between mind and creativity in the context of cognitive capitalism, semiocapitalism, and neurobiopolitics, on the other, Neidich’s research produces outcomes that challenge the very notions of the development of truth and knowledge. […] Warren Neidich’s explorations inevitably result in thought experiments that the artist has employed throughout these projects and which are featured in this publication. His specific approaches and methods turn into heuristic devices for learning, teaching, and the
production of situated knowledge via interaction, participation, critical discussions, and collaborations, as well as other dialogical methods.

// Warren Neidich is a Berlin based interdisciplinary artist whose socially engaged practice explores the interfaces between super objects that capture the mind’s attention in dynamic interactive ways as a means to investigate the new conditions of cognitive labor in the information economy. Currently his practice explores what he refers to as the extended cognitive turn in Cognitive Capitalism. Recent publications include Cognitive Architecture: From Biopolitics to Noopolitics, 010 Publishers,Rotterdam, 2010 andThe Psychopathologies of Cognitive Capitalism, Archive Books, 2013 based on the conference he co-organized at California Institute of the Arts and Art College of Design.

// John C. Welchman is Professor of modern and contemporary art history at the University of California. He has contributed to exhibitions at Tate Modern, Musée du Louvre, Reina Sophia, LA County Museum of Art, Stedelijk, MOCA, LA, Metropolitan Museum of Art, Albertina, Baltic, and Edinburgh Festival. His writings have appeared in Artforum, Frieze, Art Bulletin, Screen, New York Times, International Herald Tribune, and The Economist among other newspapers and journals.